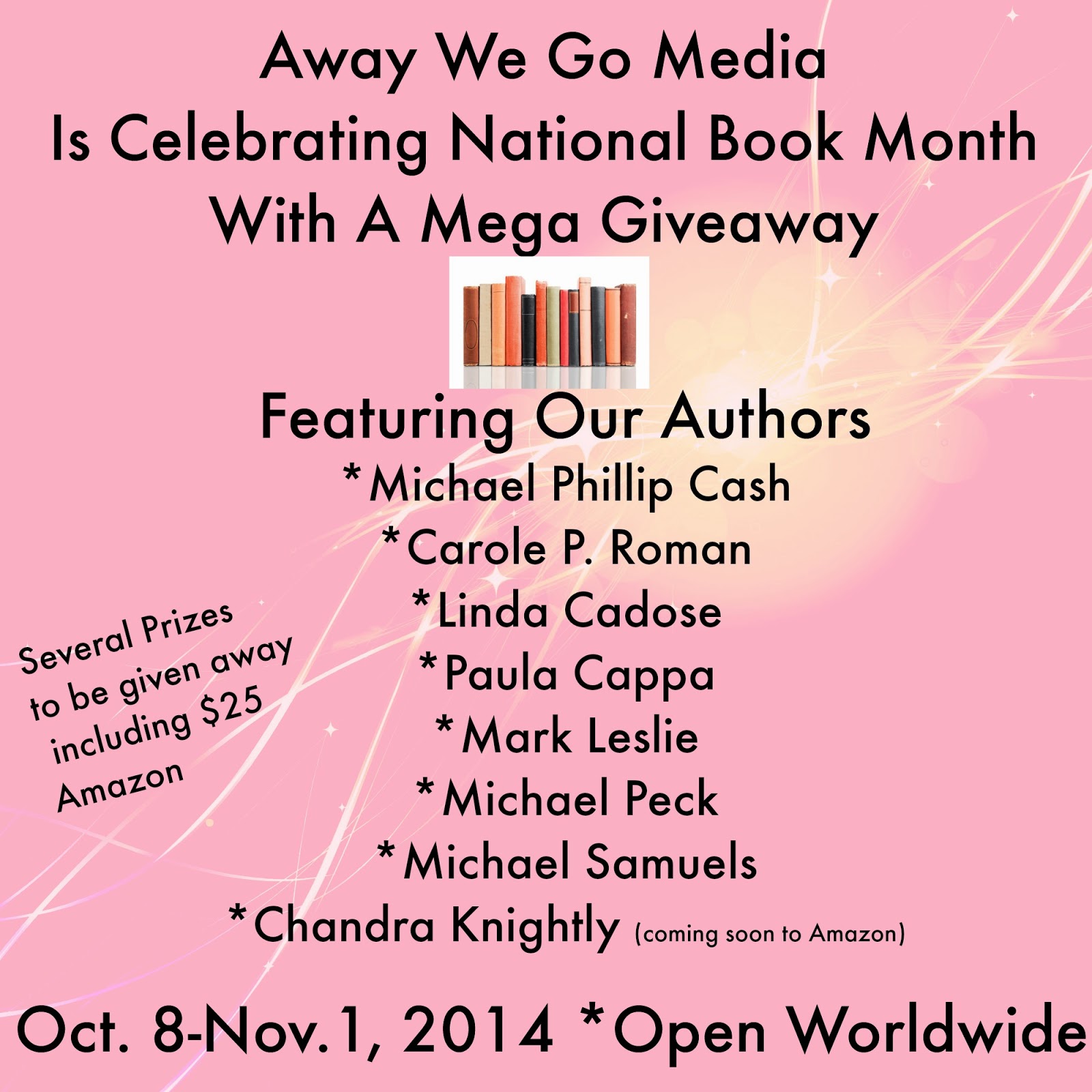 Away We Go Media is proud to represent the authors past and present who put on quality writing for reading audiences world wide. We are celebrating our authors and October's National Book Month with a mega giveaway from all of our authors.

We want to welcome our newest authors:

And so begins the battle for the afterlife, known as The Commons. It's been taken over by a corporate raider who uses the energy of its souls to maintain his brutal control. The result is an imaginary landscape of a broken America—stuck in time and overrun by the heroes, monsters, dreams, and nightmares of the imprisoned dead.

Three people board a bus to nowhere: a New York street kid, an Iraq War veteran, and her five-year-old special-needs son. After a horrific accident, they are the last, best hope for The Commons to free itself. Along for the ride are a shotgun-toting goth girl, a six-foot-six mummy, a mute Shaolin monk with anger-management issues, and the only guide left to lead them.
Three Journeys: separate but joined. One mission: to save forever.

But first they have to save themselves.

A secret lies buried beneath the haunting statuary in Old Willow Cemetery. In Concord, Massachusetts, the surrounding woods are alive with the spirits of transcendentalists Emerson, Thoreau, and Alcott. Elias Hatch, the cemetery keeper, is the last of modern-day transcendentalists. Does he know the secret power buried in Old Willow Cemetery? Would he reveal it? Next door to this cemetery is a lovely gabled house. When the Brooke family moves in, the secret of Old Willow strikes. On a cold afternoon in March, five-year-old Henry Brooke does not arrive home from the school bus stop. Antonia Brooke is frantic her child is missing, or—the unspeakable—stolen. Adam Brooke spends a harrowing night searching the Concord woods, fear gripping him as hours pass with no leads. Finally, a police dog tracks Henry’s scent inside Old Willow Cemetery. Detective Mike Balducci suspects that Elias Hatch knows the truth about what happened to Henry. Balducci knows Hatch’s metaphysical beliefs. What Balducci discovers buried in the cemetery is beyond the grave, beyond apparitions or shadowy drifts rushing through the pine trees. There are the dazzled faces in the darkened air … and their secret.

The lives of two young black men from the Harlem "hood" of upper Manhattan in New York become inextricably intertwined through a series of seemingly unrelated events. Follow Noel -- the Dollar Man -- through his early life on the street, a brief respite in a group home following his parents' arrest for abusing his sister, Jenna, culminating in several years of incarceration at the Bridges Juvenile Detention Facility in the Bronx after making a bold, but short-lived escape from the group home together with one of his roommates. At the same time, become intimately involved in the parallel life of Terrell -- the Hustler -- who spends most of his life in the home of his grandmother, "Mama B," following his own mother's departure after she murders her friend, and who chooses to drop out of high school in order to embark on a life of drug sales, fast money, sex, and violence. Until he encounters Noel.   This fictionalized novel is based on actual events.

We hope you will continue to purchase and read the books from our authors for years to come.
We have  eight (8) fantastic prizes to giveaway for National Book Month.

PLEASE NOTE The disclosure as there will be no substitutes for prizes. Good luck and thank you!

DISCLOSURE:This giveaway is sponsored by all of the authors listed and Away We Go Media. This giveaway is from October 8-Nov. 1, 2014.
The giveaway is open worldwide but note, if the winner is outside the US all books will be in Kindle form only. You must be at least 18 years of age to enter this giveaway. All winners will be drawn at random by Rafflecopter. There will be 8 winners total.

NOTE:Some of the authors are ONLY offering Kindle versions in this giveaway if you do not have a Kindle then that author will not giveaway a book to you. There will be no substitutes. Please note which authors are giving away paperbacks vs Kindles.


a Rafflecopter giveaway
Posted by Michelle aka Naila Moon at 1:36 PM