I was given the opportunity to review Bill Eckel. I hope you enjoy this as much as I did! 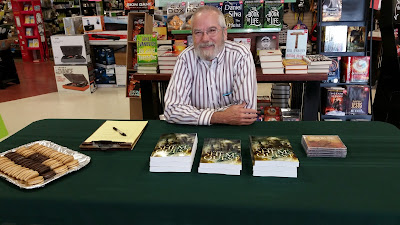 In the back of my mind, yes.  I also wanted to be a fighter pilot, a race car driver ─ Kurt Bush, my favorite Nascar driver, WON the Daytona 500!!!!  ─ a singer, an actor, and a performer.  With the exception of the first two, I've done fairly well.  I haven't hit the "big time" in any of them, but I have been active.  Now that I'm not as nimble as I once was, I write about those things.  Of all the occupations I've listed, I was a writer first and now last. As a writer, I can do all those things and do them well, at least on paper.

Fantasy followed closely by Science Fiction.  I mean, what is Science Fiction? Fantasy in a technological world.  What is technology? Scientific magic.  That is simplistic and there are, of course, other differences, but those are hairs for the purist to split.

Why?  Escapism.  Reality is such a drag that when I can get in another universe and live there for a while it eases my soul.  And fantasy has such a wide realm of possible worlds to explore.

Of my own?  That would be Bob.  Bob is a pixie-like creature, a Nem Elt-til. He is Shem's sidekick in Shem's Quest and comes into his own in Ta Recht.  I like him because there is so much of me in him.  He is small and I was always small growing up. I didn't get my growth until my senior year in high school. I went from 5'3" to 6' in the span of a year and a half.  I discovered a whole new world!  Bob is also a smart ass and I'll let it rest at that.  ;-)

As for other's characters, my favorite would be Mike. Heinlein's computer in "The Moon Is a Harsh Mistress."  I was a teenager and he was so-o-o cool.  A computer with a character arc.

Chaotic.  In need of a good cleaning. Paper piled up everywhere within reach of my hand.  Each pile is a different project. I usually have a good idea of what is in each pile.  Usually.

Schedule.  I learned that early on when I went back to school.  Writers write. Every day. If you just think about writing, you're a thinker. If you write, you're a writer.  I find mornings are best for me.  There are too many distractions in the evening. At least for me.

Breaking through the noise.  Getting noticed.   And pacing.  Every story is like a song. You have to find the rhythm of the story.

"So far so good," said the man from the bath. It was Dmitri's voice. He stepped out of the bath and motioned. A table was placed in front of the robotic body that moments before had housed Dmitri's consciousness. On the table was mounted a laser pistol. The fleshie Dmitri aimed the laser pistol at the robot's head and threw the relay switch that connected the firing stud to the technician's toggle. Dmitri gave Charles a wink and returned to the bath where the female technician reconnected him to the fiber optic cable. With a gleam in his now human eye, he asked Charles, "All secure?"
"The panel's green, Dmitri," answered Charles.
Dmitri lay back down in the fluid. He took a moment to luxuriate in the pleasant warmth of the liquid. He seldom inhabited a Fleshie body. He had long ago determined they were too fragile. So, whenever he did inhabit one, he took every advantage of the fact the human epidermis was one large sensory organ. His indulgence sated, Dmitri signaled the technician to toggled the switch. Once again, the essence of Dmitri's life force, his spark of consciousness switched bodies.
There was no lag in awareness. The near instantaneous processing time of the human brain had been meticulously reproduced in Dmitri's AI. Dmitri could run full tilt and switch from body to body without breaking stride. The now mechanical Dmitri opened his eyes and immediately moved his head to the right. The laser burned a hole in the back of the chair where Dmitri's head had been.
"You are insane, Dmitri. You do know that, right?" asked Charles.
"Please turn off the laser, Charles."

I could go on all day about Dollar Bill.  He is my most favorite me.  As Dollar Bill, I poke fun at everyone and everything.   "Yard Sale" is a great song. It's a parody as is the clone song, "Stuck in the Middle with Me"  "How could Someone Stupid be my Boss" makes people smile and I can clear out a room with "I Had to Pee".  Most of them are comedy routines put to music more than singing. And I thank God every performance for auto-tune.  Country rock.  Come to think of it, there's a video on You Tube for Yard Sale.

Entertainment is not just laughter.  I like the tear jerker scenes in movies.  Armageddon still makes a tear come to my eye main character says goodbye to his daughter.

No, I've moved WAY too many times for that. I know what the first one was about though.  It was an aerial combat engagement over the steamy jungles of the south pacific. The hero shot down three enemy planes before his Wildcat got hit.  He had to bail out over the jungle.  I didn't get to finish it, because my teacher caught me writing it and I was supposed to be doing a math exercise.

Heinlein and Tolkien.  They were the most influential.  I think it's Tolkien's fault I have trouble with pacing.  I want to write the long flowery descriptions and apparently readers (or editors/publishers) want a faster, action-oriented approach with minimal sequels and expositions.

What would I ask them?  Can I borrow twenty bucks?