Jekyll Island, Georgia: A Table With A View

Before leaving Jekyll Island, we ate lunch at SeaJays, a beautiful restaurant with southern charm. It was nestled beneath the oaks with a breathtaking view of the marina. Wrap around porches were inviting, and the shade from nearby trees made it possible to linger and enjoy. It seemed like a welcoming place. You could dine inside or on the porch, overlooking the boats in the marina and the boats coasting along in the beautiful blue waters. As we entered, we began seeing signs for their Low Country Boil. We started getting our hopes up only to to have them dashed. If you want to eat Low Country Boil, visit them for dinner! We were greeted by a waitress and shown to our table, disappointed that their Low Country Boil wasn't until later that day. 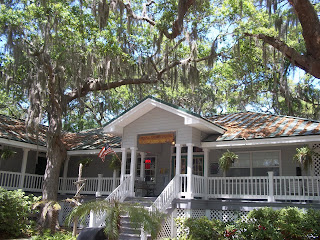 My husband ordered Nachos Carne Supremos. It was good. He ordered sweet tea and was a little disappointed when he had to get up and find a waitress to get a refill. His glass was more than half full of almost completely melted ice. Instead of dumping it, the waitress poured new ice into it and topped it off with tea. 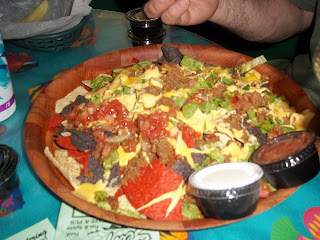 I ordered Breaded Chicken Tenders that were described on the menu as crisp. Unfortunately, they were limp, as if they came straight from the microwave. I know they were not baked or fried. I could only eat one. Thank goodness they came with a bag of chips! Regardless of this experience, I'm betting their Low Country Boil is to die for. It looked that good, in pictures of course. I wouldn't hesitate to give them another shot. Just don't ask me to have chicken tenders! 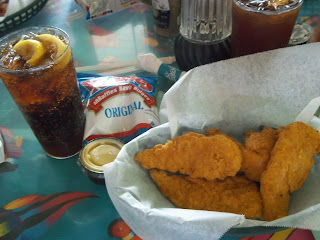 Logan and Sam had pizza. Not only did it look good, it tasted great! The kids were happy and that made me happy. We had the pleasure of  looking out over the water while we dined and that was a treat! With the meal costing around $35, not including tip, I was a little disappointed. I don't think I will be back for lunch, but I will definitely be back for dinner.
Disclosure: Honest opinions given. No monetary compensation received. 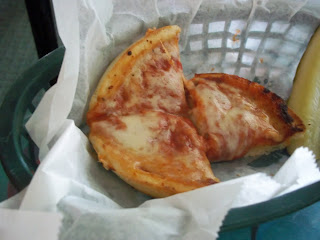