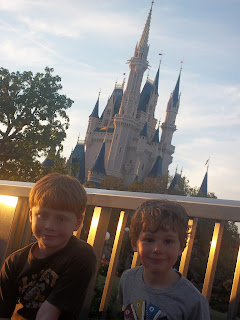 The most anticipated day of our trip to Orlando was our final day, when we spent the day at Disney's Magic Kingdom. For a while now, I've been thinking about taking my kids to Disney World. Logan just turned nine, and I thought he was past due! Sam just turned four, and I knew he probably wouldn't recall the details of our trip later on. I knew we would have the chance to go again in the future, so it wasn't a deal breaker for me. I grew up going to Disney World with my parents and then going with my mom when my dad didn't want to fight the crowds. I think I was seven when I went for the first time. I may have been the only child in the world that was disappointed to find out that we were going to Disney World. It was a surprise trip and I think I disappointed my parents. I really wanted to go to the beach! But after that first trip, I became enchanted, and I couldn't wait to go again! 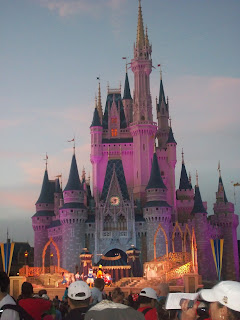 For those of you trying to decide if the time is right to take your family, there are a few things to consider. If you have a small child and you will only be able to go once during their childhood because of the expense or distance, wait until your youngest can fully appreciate the trip. If you're putting it off because you've been told to wait (by friends or family) because your child won't remember the trip and it isn't worth it to spend the money for a trip your child will forget, you should pack your bags and go. Sam had the time of his life and his smiles and laughter were priceless. I wouldn't have missed this for anything. A month later, he's still talking about Goofy, Mickey, Minnie, and Donald. 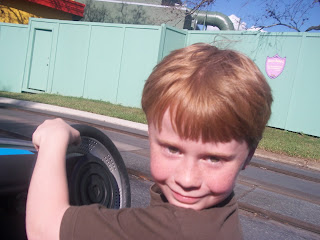 We visited Wednesday March 13, 2012. We surprised the kids. We popped in a CD and listened to the song from the Disney World commercial (I LOVE those commercials) and waited to see if they would notice the signs posted along the roads. They didn't, so we pulled over and told them where we were going! They happily sang along with the CD as we entered the parking lot. Corny, maybe. But every time they see the commercial at home (and it comes on often!) or hear the music, they'll hopefully remember their own trip! We arrived as the park opened and started with a Magic Carpet Ride! Afterwards, I found my favorite ride, Pirates of the Caribbean! It was a mix of new and old!  They took a classic ride from my past and mixed in a little Jack Sparrow. Awesome! My kids loved it. We all did! We didn't have to wait in line for more than fifteen minutes for any ride before sitting down to lunch. The park wasn't crowded and the temperature was very comfortable. Compared to some of the other theme parks, the rides are long! It makes waiting in line worth it! Another plus? Sam could ride almost every ride. He did ride everything except for Space Mountain (it had a 90 minute wait -and he was too short- so we skipped it) and maybe one or two other rides. Towards the end of the day, the lines were longer and there were more visitors! I'm glad we were able to make the rounds and see (and do) everything the kids wanted to do. 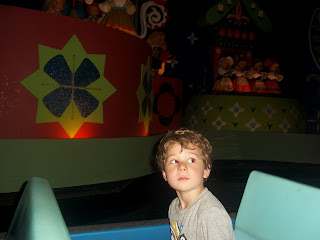 Logan and Sam rode all the rides that I enjoyed as a child and we even had a few new rides to experience. It was wonderful to relive my childhood and see my children living theirs to the fullest! It was a magical experience for us all! Logan posed with Goofy, but unfortunately, Sam was terrified of the giant characters! I think he regretted it later on because all he could talk about for days was getting his picture taken with Woody or Mickey. Maybe next time! 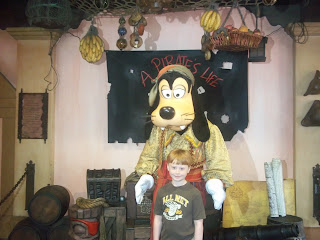 Before the Electrical Parade, we had been on every ride that we wanted to ride, had a sit down lunch, and we had time to grab a snack before reserving our spot on Main Street for the Electrical Parade. We bought bubble guns for the kids and watched them play in the street. My husband bought popcorn, drinks, and an assortment of candy (to take home!) and we eagerly awaited the start of the music and the parade of lights! We found our seat about an hour before the start of the parade. it was a great spot and we had a great view! Sam decided it would be the perfect time to take a nap. When the parade started, I tried in vain to wake him but he was out for the night. Thank goodness we brought the stroller! 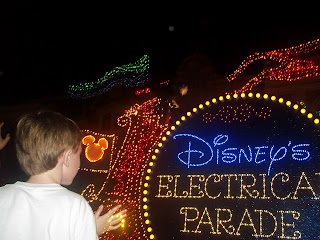 One of the cast members was sweeping up the streets before the start of the parade. I was so impressed when he stopped in front of us and asked a little girl if she had dropped her popcorn. After she told him that she had, he disappeared for a few minutes and returned with a fresh bag! That really made our day. He also made that little girl and her family smile. That's magic! It's one of the things that sets Disney apart from the rest. They want you to make wonderful memories and have the time of your life! 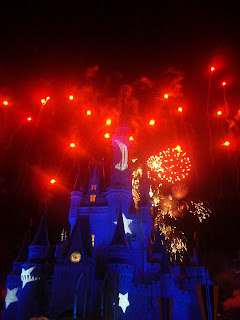 The fireworks were more extravagant than anything I've seen in the past! They certainly got better with time. The light show and the transformation of the castle is enough to give you goosebumps, especially when they show photos of families making memories using the castle as the backdrop! It was spectacular! I'm no expert on the dos and don'ts of planning your vacation to Disney. I've been to the Magic Kingdom numerous times and I've been to Epcot once. Being able to take my children and watching it all through their eyes made our trip one of the best days of my life. It was certainly the best vacation. I was so happy when I left the park that making the mad dash through the crowds to the ferry (and then the parking lot) with a stroller didn't dampen my spirits. And it was a little more than chaotic! I can't wait to go again! Next time, maybe we'll check out one of the other parks too! I want to go on safari! 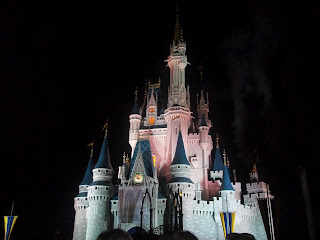 Disclosure: I was given four passes to experience the magic and create wonderful memories with my children. I feel that creating lasting memories such as these are the best (birthday or holiday) gifts you can give your children!
Posted by Unknown at 12:55 PM