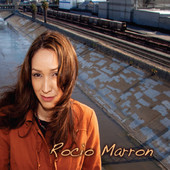 I love to sit back and relax with music. It's  one of the few things that help me relax when I'm feeling anxious or stressed. I am always in search of something new and I was recently introduced to Rocio Marron. Her unique style is soothing and her music and lyrics are full of richness and depth. I swear, I can feel (and hear) her heart and soul in the music and it has a wonderful way of holding on to you and not letting go. I'm hooked!

“For years, I’ve enjoyed playing and interpreting other people’s music,” said Marron. “Now I had the chance to write the music that had been inside me waiting to be recorded. I had to look no further than my own experiences and love of family to find the inspiration and words to create this album.”

Rocio Marron, released in November 2011, represents the kind of poetic musical stylings and poignant lyrics she hopes will linger in people’s minds. The songs in this debut album draw from Marron’s own life, and are designed to touch the listener with relatable lyrics and soothing melodies. With songs like Heartaches Will Mend, Promise You, and Should Have Waited, Marron’s lyrics deal with the loss, discovery, and overwhelming feelings of love. “The deepest feeling of unconditional love I ever felt was when my daughter was born,” said Marron. “Motherhood has brought a whole different perspective on life and priorities. It amazes me that it has made me feel so much, to the point of wanting to share it with everyone.”
Marron put her multiple talents both in front of and behind the microphone composing, singing, and playing instruments including the violin, viola, and guitar on this album. She also arranged and engineered the tracks along with longtime collaborator Dante Pascuzzo.

Her first video from this album, Leaving Dreams was produced and directed by Eddie Arguelles of Tochtli Films and is now on her YouTube page youtube.com/rociomarron. “The song deals with the loss of love and realization that one must move on. It’s that moment when you realize that it’s the best thing to do for yourself,” said Marron. The video is set in an abandoned Victorian home signifying the end of a relationship and an vibrant outdoor dried creek signifying a rebirth. “Where once you felt safe at home with a partner, now there is an empty feeling surrounded by darkness. It’s not until you search for a way out that you find the light and are able to move forward,” said Marron. Her next solo album is set to be released in November 2012.

Rocio Marron is an accomplished violinist whose passion also includes singing and songwriting. After falling in love with music as a young girl and attending a high school for the performing arts, Marron studied performance violin at USC’s Thornton School of Music. She has toured, performed and recorded with Marc Anthony, Josh Groban, The Red Hot Chili Peppers, Cuban bass legend Cachao, Los Lobos, and Grammy-nominated Caravana Cubana, among others. Rocio has also arranged and recorded as musical director for the Grammy-winning Mariachi Divas, and she’s been a featured soloist with Ozomatli at the Hollywood Bowl. In film and television, Marron has recorded for major motion pictures including “Blow” starring Johnny Depp and Penelope Cruz, “Dance with Me” starring Vanessa Williams and “The Rugrats Movie”. She has also appeared on television programs such as The Young and the Restless, Saturday Night Live, Mad TV, The Rosie O’Donnel Show, and The Tonight Show. She performed on stage at the MTV Video Music Awards, American Music Awards, Radio Music Awards, and the Grammy's. Most recently, she appeared on both the 2012 season of The Voice and American Idol. She teaches violin and guitar as a faculty member of the Silverlake Conservatory of Music.

Disclosure: I was compensated to share this information with my readers. Any opinions expressed are mine and not influenced in any way.
Posted by Unknown at 12:59 AM