Review: No Pit So Deep: The Cody Musket Story 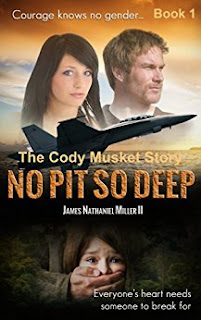 No Pit So Deep: The Cody Musket Story is a book about faith, love, ghosts of the past and forgiveness. It isn't the type of book I typically read, and to be honest, it took me while to start the book. Once I began, I couldn't put it down. Author James Nathaniel Miller II was inspired by real events and real people, and the fictional tale that he weaves is based on threads of truth. Cody Musket is a hero, in war and his civilian life. The horrors he faced in his military career have shaped the person he is today. He carries within him the demons from his past, never truly understanding God's grace until he begins to face the nightmares that torment him each night. It takes a chance encounter and a lot of faith to face those demons and begin healing from his emotional wounds that threaten to destroy his future.

Miller does a great job building character and plot development. His characters are likable and have tremendous depth. We are given the chance to watch them grow and flourish throughout the story and they don't disappoint,  entertaining us from the start to the finish. The book not only gives you more than a glimpse of the terrors of war, but it also gives us a hard look into a personal battle with post-traumatic stress disorder. The love story is clean without all the sexual suggestions that most books these days tend to rely on. The story itself is a testament to God's love and the power it has over evil.

The beginning of the book is the real cliffhanger here. Part two is coming soon, but I wish the author had circled back to the beginning before ending the book, even if he allowed the cliffhanger to remain. Because he didn't, the first chapter feels a little out of place. There were also a few parts toward the middle to end of the book that felt a little rushed or needed to be fleshed out more. I would have appreciated a few more details, not only with the characters but also will many of the scenes. Towards the end, things felt a little rushed compared to the beginning when the author took more time creating a solid foundation for the plot and the characters. All in all, this book is a well deserved four and a half stars. I enjoyed this book more than I expected and I am looking forward to part two.
Posted by Unknown at 6:30 PM