Travel Through Time At Fernbank Museum Of Natural History 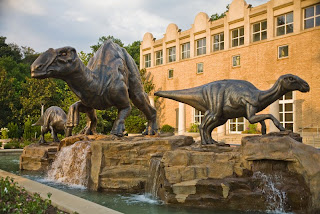 On my recent trip to Atlanta, I was given the opportunity to visit Fernbank Museum Of Natural History. I was joined by Logan, my six year old, and my mom. The Fernbank Museum Of Natural History is nestled among sweeping lawns and grand homes, just minutes from Midtown Atlanta. It's easy to find, and well worth the trip. When visiting Fernbank, you are greeted by three bronze giants. The dinosaurs are so realistic, I expect a scene from Jurassic Park to play out in front of me. The dinosaurs are a hadrosaur species known as Lophorhothon atopus, which were native to our region. The magnificent dinosaurs are only a prelude to the wonderful world that awaits, just inside the museum doors. 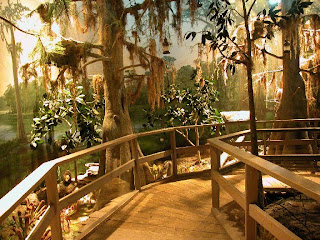 When I first heard of the Fernbank Museum, I thought of dinosaurs. Entering the the museum on the second floor, I walked to the railing and caught my breath. The center of the building is a giant stage, where dinosaurs great and small take center stage. The display rivals those of grand museums and I was not disappointed. The entire layout revolves around this focal point and Logan was mesmerized with the impressive sight. Circling the second level, we were met by various animals, all indigenous to Georgia. 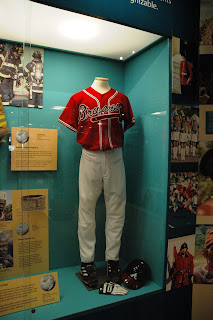 The exhibit, A Walk Through Time in Georgia, was my personal favorite. Walking through the different regions in Georgia, each gallery transported me through different times or seasons. The artists captured the essence of autumn in the beautiful Appalachian Mountains and walking on a wooden dock, I could feel the Okefenokee Swamp come alive around me. Animals dotted the landscapes and the trees were full of various birds, each on the lookout for a hearty breakfast. Logan walked with dinosaurs and greeted a baby dinosaur emerging from it's shell, the newest member of a prehistoric world. 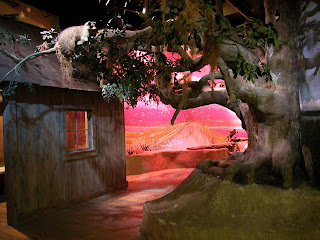 Since we had a late breakfast, we decided to forgo lunch. However, needing a break, we ordered a drink and a snack. The Fernbank Cafe was immaculate and I was impressed with the fresh sandwich selections that were offered. Salads and pizzas were also available. The snacks we purchased were very affordable. We stepped out onto the Terrace after we finished eating and enjoyed the sights and sounds of nature. The lush landscape featured a well travelled path that was tempting to take. It was hard to believe that only miles away, you could find bumper-to-bumper traffic, blaring horns, and sirens. A couple of dinosaurs make their home on the sprawling Terrace. They, along with the lush backdrop beyond, make a fantastic photo opportunity for families and friends. Moving on to the other exhibits, we found The World Of Shells. Living in a coastal state, I never thought I could become so excited over shells. Entering this realm, I discovered shells from around the world. Intricate creations that are so perfect in their creation. A few featured brilliantly detailed artwork that would have made Van Gogh a little envious. 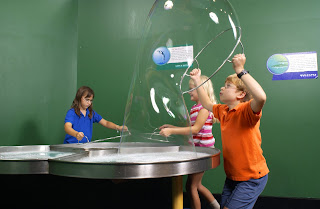 On the top floor, we stopped to admire an authentic dugout. I marvelled at it's construction, an engineering feat I could not imagine performing on my own. It doesn't compare to temples or pyramids, but I think it would be rather difficult to carve a boat from a log, especially with a rock as your main tool. It made me realize how much I rely on modern conveniences. We as a society have come so far. Next, I stopped to admire a "jewel" encrusted geode. Nature never ceases to amaze me. I ventured into an educational center. Logan held the jaws of a bull shark, then he held a Megalodon tooth which helped him realized how enormous the ancient beast truly was. Activity tables were set up and children were coloring masks and more! We walked into a room filled with uniforms and dresses, headpieces and jewelry. Here, I fell in love with a pair of Jimmy Choos and I felt my heart skip a beat as I admired Cartier. Logan was more interested in familiar sights. Firefighter Turn Out Gear (just like his dads) had a place on the wall next to Military Dress and even an Atlanta Braves uniform. Traditional women's footwear from the pages of Chinese (not so long ago) history made me stop to take a closer look. 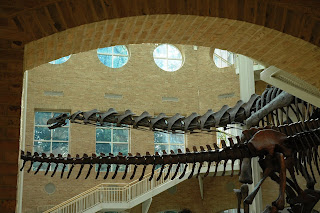 Next we made our way into activity rooms that I am glad we saved for last. There was a room for 3-5 year olds and a room for children ages 6-9. Logan fished off the dock at the Okefenokee Swamp. After releasing his catch, we quickly toured the rest. We spent the majority of our time in the Sensing Nature exhibit. It is a massive room filled with interactive stations. You can spend hours of time in here and never get bored. Play with mirrors and bubbles, or electricity and weather! There was so much to see and do. Crowds of people gathered, but there was always an empty station. For popular attractions, the wait was not long. Everyone was courteous and no one seemed to take over an area, which is a far cry from behavior that I have experienced elsewhere. It is filled with wonder, and Logan is not the only one that enjoyed it. Adults and children came together in this exhibit where senses are challenged in all ways imaginable. We watched a tornado form and played with light and sound.

There were no special exhibitions on display, but the Gold and Georgia's Heart Of Gold Exhibitions will open September 26. I think it would be interesting and educational. You can also check out the IMAX Theatre featuring Everest and Cirque Du Soleil's Journey Of Man, each playing until September 13, 2009. I hope I can make it back to see The Living Sea, which opens September 14!

We had a wonderful time at Fernbank Museum Of Natural History. To disclose, I was given a pass in exchange for this review. I will be visiting again when I return to Atlanta. Out of town visitors should check out City Pass. It is an affordable way to take in the best of Atlanta. Georgia residents may consider an affordable membership which entitles you to free admission for one year. Membership has it's benefits, as the saying goes. Here, you can save up to 40% off IMAX tickets, and enjoy savings in The Fernbank Café and Museum Store! I'll let you know when I return! I am hoping to take in a special exhibition soon and maybe an IMAX film or two!