Breakfast with the Biologist! 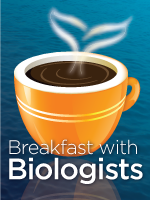 In his present role, David works closely with scientists and engineers at the forefront of global exploration and discovery. He has participated in numerous expeditions to the Atlantic, Pacific and Indian Ocean, and to the Mediterranean Sea. He was one of the first oceanographers to use a combination of manned submersibles and robots to map the undersea world with unprecedented clarity and detail. Most recently he was co-expedition leader during an exploration of RMS Titanic and the German battleship Bismarck using the Russian MIR submarines.

David is passionate about exploration and discovery and dedicated to communicating the importance of science and engineering to the public-at-large. He maintains close working relationships with scientists, filmmakers, and media broadcasters (Discovery Channel, History Channel, and National Geographic, PBS). He was instrumental in the development of the JASON PROJECT and is presently involved in the development of the FIRST Lego League Ocean Odyssey.
David has lectured extensively nationally and internationally, to audiences ranging from elementary school children through CEO's and he has participated in numerous television and radio broadcasts. He was awarded a Computerworld-Smithsonian Award and is a recipient of the John J. Conley medal for communicating science to the public.
See you next Saturday!
Disclosure: I have a previous relationship with Georgia Aquarium but was not obligated to share this post.
Posted by Unknown at 8:27 PM