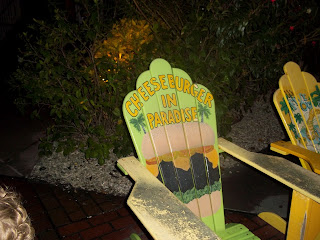 During our trip to Orlando, we were treated to a wonderful dining experience. I've had great restaurant experiences before, but this ranked in the top three. At Jimmy Buffett's Margaritaville-Orlando, you'll find great food and service, great music, and great entertainment. The only thing missing was the beach and having warm sand between my toes. 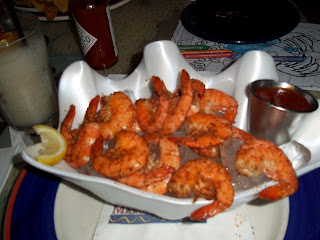 We had Peel and Eat Shrimp, which was simmered in beer with lemon and Old Bay Seasoning. It was a bit to spicy for the kids, but I couldn't imagine a more perfect start to a perfect meal. The shrimp were large and cooked perfectly. They were tender and the spicy "cooking broth" clung to the shrimp to make them finger licking good! 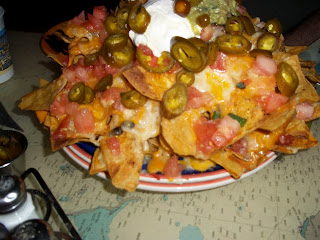 My sister-in-law told us not to miss the Volcano Nachos. We didn't. My jaw nearly hit the floor when they where set on the table. It was a stack of nachos that could feed a dozen. Maybe that's a slight exaggeration, but not much! Topped with chili, cheese, guacamole, sour cream, jalapeños, tomatoes and scallions, this stack has to be the best nachos my family has ever had. 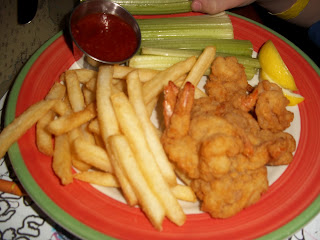 Sam had the Fried Shrimp Platter from the kids menu. I tasted it because I couldn't resist. It was so flavorful and the shrimp were cooked perfectly. When we eat out, I've found that the kid's menu may look good, but it's often a different story when it comes to the table. Here, it looks like the chef takes as much pride in the children's plates as he takes in the regular menu. The prices were surprisingly low for the amount of food served, which is always a plus! 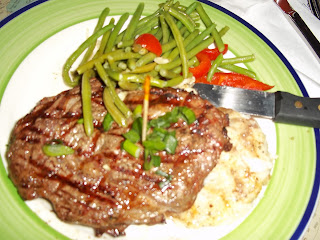 I had (and shared with my husband) a Ribeye Steak, mashed potatoes, and seasonal vegetables. My green beans had a little snap with was nice and refreshing. My ribeye was placed over my potatoes, allowing the juices and seasoning to soak in and enhance my mashed potatoes. So delicious! Even Logan couldn't help but comment on how amazing they were. The ribeye was cooked exactly as ordered and I could cut it with my fork. The seasonings brought out the flavors of the meat and made it impossible to leave anything on my plate! 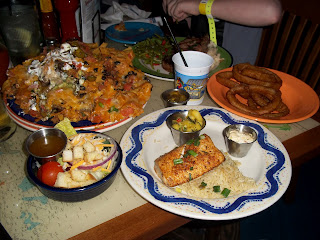 My husband had a Blackened Mahi Mahi and shared it with me. It was juicy and perfectly cooked (a habit here, it seems) and the seasonings were wonderful. It wasn't as spicy as I would like, but it wasn't lacking flavor. While we enjoyed dinner, a "Margaritaville Girl" on stilts (not sure of the exact title-but she did an awesome job!) got the guests in the mood to party and enjoy the wonderful atmosphere. She made balloon swords for the kids and encouraged clapping and singing along. Jimmy Buffett played on two screens (one was a sail!) and we were there in time to watch the volcano erupt! Afterwards, a live band played a crowd of happy people danced and sang along. This night marked Logan's first time dancing in public and he had a blast! He's quite brave  for an eight year old! 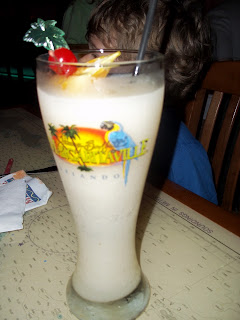 I had the best Banana Daquiri in the world. I've decided I must get one of those Margaritaville Frozen Concoction Makers. If it makes drinks half as good, I've gotta have it! We finished it off with desserts, ordering a Peanut Butter Pie and Chocolate Hurricane. Since we were celebrating Logan and Sam's birthday, they brought it out with a candle. The night was perfect and I seriously don't think it could have been better. 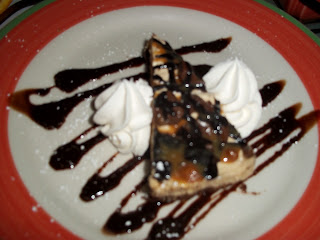 After dinner, sit back and enjoy the music or head to the gift shop! Margaritaville-Orlando is easy to find. It's located outside the gates to Universal Studios and Islands of Adventures, We had dinner there after seeing Blue Man Group. With the numerous dining choices in the area, I think we made the best one. It's a choice I'll be making again! 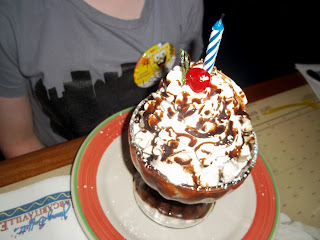 Disclosure: We were invited to dine at no cost. Let me add that free food isn't always good food and my opinion is in no way impacted by the compensation. Neither is my love of Jimmy Buffett music and flip flops. 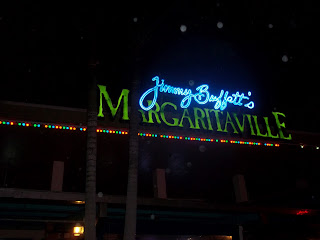