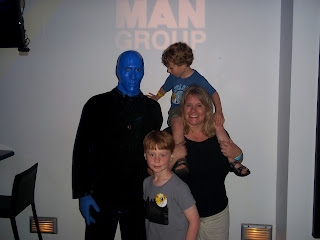 One of the greatest shows in Orlando has to be Blue Man Group. My husband saw their show many times while living in New York City. He always told me I had to go and see it for myself! Well, this year, I did get the chance to go with my family. It was better than I expected and different from what I imagined. I've seen the Blue Men in commercials so I knew a little about them. When we went to Orlando earlier this year, we were given tickets for a show one evening. We forgot to leave early and ended up trying to get there during rush hour. We parked in the Universal parking deck and had to run (quite a distance) to make it on time. I felt like I was dying as we found our seats. After the show began, I was so thankful my husband rushed through the crowds and got us there on time. We avoided the embarrassment that other ticket holders faced when they walked through the doors late. They appeared on the big screen and they became part of the show. It was all in good fun, but better them than us! We sat just beyond the poncho section and we were close enough to really see all the action but far enough away to stay clean! The show was amazing. It's not just for adults. My three and eight year old kids loved every minute! The music is very cool and you not only "see" it, you can feel it! I loved watching the Blue Men create art and then pass out their creations. I wish they had a gift shop that offered prints or originals. It would have been nice to take home a souvenir! The Blue Men were so funny throughout the show. There was never a dull moment. They went out into the audience for participants and the audience members chosen played along for each "skit." The participant's facial expressions were priceless and had us all laughing! That's what makes each show unique! I will definitely go again when I return to Orlando or any other city where they they have a show. The finale is fun and everyone in the audience takes part. You pass giant inflated balls overhead and then the rolls of tissue come out. The music, the lights, and the energy is amazing. It makes you feel so alive! Get your discount tickets for Blue Man Group Orlando! After the show, we went to the VIP area upstairs and met a Blue Man. We were able to talk (yes, they TALK!) with him and take pictures. There is also a bar and you can sit down and have a drink with them in the lounge! It cost a little more for this experience, but it's well worth it. It wasn't crowded at all so we weren't limited in the time we spent with the Blue Man. I can't wait to go back!

Disclosure: I was given VIP passes in order to review the show. Opinions are my own and not influenced in any way.
Posted by Unknown at 2:15 PM