DeLuca's Phantom Is A Must Read! 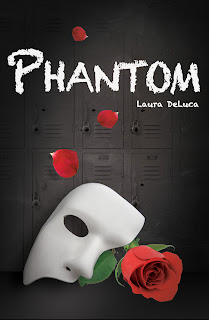 I'm a little ashamed of myself for two reasons. First, it took me a while to get this review up. You don't just read a Laura DeLuca book, you plan for it. You want time to indulge and you don't want to be interrupted. With so much going on lately, it took a little longer than planned. Second, I'm in my late thirties and I am daydreaming about a high school boy. If you've read "Phantom", you won't find that odd. If you haven't, you should read it before you label me as anything other than normal.


The “Phantom” was a musical phenomenon that Rebecca had always found enchanting. She had no idea that her life was about to mirror the play that was her obsession. When her high school drama club chooses “Phantom” as their annual production, Rebecca finds herself in the middle of an unlikely love triangle and the target of a sadistic stalker who uses the lines from the play as their .

Rebecca lands the lead role of Christine, the opera diva, and like her character, she is torn between her two co-stars—Tom the surfer and basketball star who plays the lovable hero, and Justyn, the strangely appealing Goth who is more than realistic in the role of the tortured artist.

Almost immediately after casting, strange things start to happen both on and off the stage. fall. are shattered. People are hurt in true phantom style. They all seem like accidents until Rebecca receives notes and phone calls that hint at something more sinister. Is Justyn bringing to life the twisted character of the phantom? Or in real life are the roles of the hero and the villain reversed? Rebecca doesn’t know who to trust, but she knows she’s running out of time as she gets closer and closer to opening night. Only when the mask is stripped away, will the twenty first century phantom finally be revealed.


When I started reading this book, I instantly connected with Rebecca. She is your typical girl next door. She imagines herself with the most popular boy in school and thinks he'll never notice her. She lands the lead role in the school play and that changes. She develops a relationship with two very different guys. Rebecca takes us on quite an adventure as she finds herself and discovers true love. "Phantom" is a mystery that makes Rebecca question everything around her. Justyn is the type of guy you're probably not drawn to from the beginning, but you'll secretly (and then openly) cheer him on in the end. DeLuca has a way with words-that's obvious once you read her books. The real magic is the way Laura DeLuca gets the reader to fall head over heels with her characters. It has happened every time I've picked up one of her books!

Buy it at Amazon and download a copy on your Kindle! You can also get it at Smashwords! "Phantom" is a page turner that will keep you on your toes. It has a surprise ending that will catch you off guard! Enjoy!


Disclosure: I received a copy of this book to review. Opinions expressed are my own and not influenced in any way.
Posted by Unknown at 2:50 PM