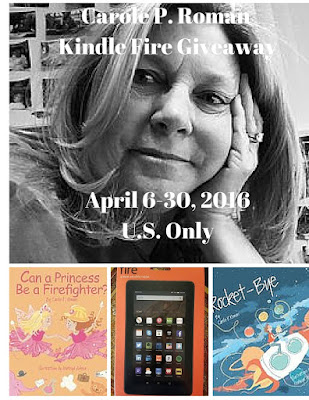 Welcome to the Carole P. Roman Kindle Fire, Rocket-Bye book and Can A Princess Be A Firefighter giveaway. Hosted by Carole P. Roman, Away We Go Media, Julie Gerber of Hits and Misses, and Naila Moon of Just the Stuff Ya Know.

Named to Kirkus Reviews' Best of 2012 for her first book, award winning author Carole P. Roman started writing as a dare from one of her sons. Using an imaginary game she played with her grandson as a base, Captain No Beard was born."Captain No Beard- An Imaginary Tale of a Pirate's Life" has not only been named to Kirkus Best of 2012, it received the Star of Exceptional Merit, and won the Pinnacle Award for 2012.

Following up this series is yet another award winning series, "If You Were Me and Lived In..." This book series has taken children around the world to visit other children that do things similar to themselves and bring cultures closer together. Carole P. Roman's formula in writing the book series has made children aware of cultures that are not quite like their own.

Now, Carole P. Roman has written two new books  in poetic form that are nods and great love to her grandchildren. She is sure your kids and grandkids will love them too. 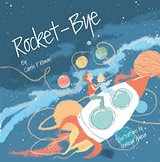 About Rocket-Bye:
Travel to the stars, orbit the moon and rocket past planets in this adorable journey to the far reaches of the galaxy. A beautiful bedtime poem, this verse is sure to delight any child before they go to sleep. 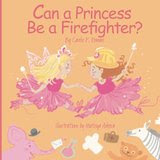 About Can A Princess Be A Firefighter?
Two little girls pepper their father with questions about whether or not they can be a professional and still be a princess. Motivated by her granddaughter's fascination with all things 'princess.

To celebrate the release of these two brand new books, Carole P. Roman is generously giving away a Kindle Fire (not HD) and a copy of each of these two books. One reader will receive all. Simply start by entering below and good luck!

Disclosure:
This giveaway is sponsored by the author, Carole P. Roman and arranged by Away We Go Media. The blogs hosting and co-hosting are not responsible for prize shipment. The Kindle Fire Prize and books are provided by the author who is responsible for prize shipment. This giveaway is not affiliated with Facebook, Twitter, YouTube, Pinterest or any other social media site. All entries will be verified.  You must enter the first entry for notification purposes but this sole entry does not constitute a win for you. You must enter at least one other entry for qualification. NOTE: It may take up to 6 weeks to received prize after the close of the giveaway.

Winner has 48 hours to respond after notification via e-mail or forfeit prize and another winner will be drawn.

Entry-Form
Posted by Michelle aka Naila Moon at 12:00 PM